There’s a wise saying, “If you need to build a city solution, call a teenager.” Okay maybe that isn’t exactly an age-old adage but perhaps it could be in the near future based on the innovation that was delivered at the culmination of a unique program that encourages civic engagement at the City of Austin.

On July 13, four teams of 19 high school students presented solutions to some of the city’s real-world challenges as part of the city department Communication & Technology Management (CTM) Summer Internship.  What they came up with in just a six-week span rivals the solutions of many private-sector companies. 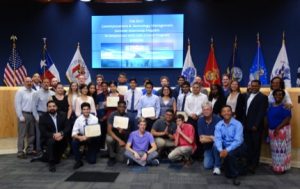 The overall winner of the competition, Team 1051, created a bot for the Austin Municipal Court that provided immediate information to the most commonly asked questions and clearly demonstrated how they could save the city staff time and resources. They implemented machine-learning techniques and anticipated all of the different ways that users would interact with the technology. “I never knew there were so many ways to say hello,” said one of the team members.

Another team developed a fully functioning, visual mapping experience for Austin Parks & Recreation Department so that users could more easily access the location and information about parks, trails, pools and city resources. The usability and functionality, a great improvement from the previous site, is live now at https://atxparks.org.

Teams were rated on Problem Solving, Team Building, Entrepreneurship and Innovation. Each team excelled in a particular area and was recognized for their contributions.  Wei San Hui, Agile Coach at City of Austin, was the program leader and primary liaison with the teams. “They are really heroes,” said Hui at the end of the competition. 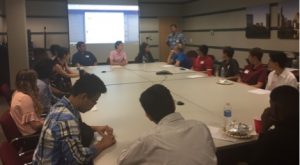 The program also engaged several members of Austin’s tech community. Marc Boudria, Director of R&D at Chaotic Moon Studios, now Fjord Austin, worked directly with the students and coached them through many of the advanced technologies that were implemented in the projects. Dell was also a key supporter for the program.

It is encouraging to see the City of Austin encourage more interaction from its residents, including those who are barely old enough to drive. The quality and commitment demonstrated by the Internship participants is further proof that there is great wisdom of the people who live and love this city. Let’s hope this is a sign of more to come.